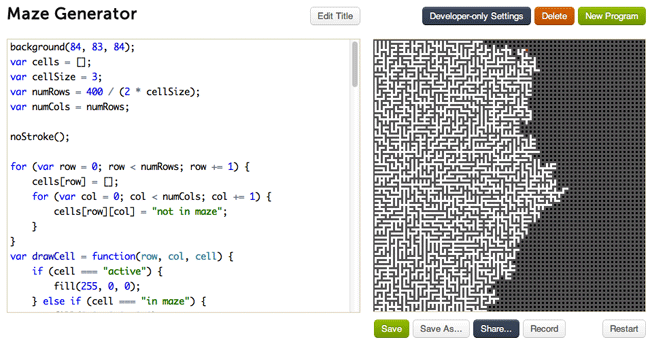 When I was 6 years old, my mom asked me what kind of summer camp I wanted to go to. I excitedly exclaimed “LEGO!” She laughed it off a little then asked me to choose some other options, so I picked a couple sports camps and trampoline camp.

A few weeks later, she found a Science and Technology camp called Virtual Ventures which actually did have playing with LEGO as part of the camp activities. But it was even better than that – it was LEGO robotics!

I went to that camp for the first time in 1998. In the 11 years that followed, I spent almost every full summer there, first as a camper, then as a volunteer, then 3 summers as an instructor. (I played with LEGO almost every week of it.) The life changing thing I got out of it was a fascination with programming.

When I started there, I was saving HTML files to 3.5” floppies showing off my talent with <marquee>, <center> and (probably) <blink> tags. By the time I left before going to the University of Waterloo, I had rewritten the camp registration system, taught kids about how the internet works, ARP spoofing and botnets, written my own (terrible) blog system from scratch, had a stint as a teenage hacker, began my adventure into vim, and generally did my damnedest to get kids interested in programming.

Through all of that, where I spent my computing time varied wildly, but the one element that was almost always present was web development. Two reasons I think that this persevered over all else:

And these are two aspects that we tried to amplify like crazy when building Khan Academy Computer Science.

I was at CUSEC when Bret Victor did his incredible talk Inventing on Principle, so I was ecstatic when I found out I would be working with John Resig on making one of the editors in the video a reality. If you haven’t watched Bret Victor’s presentation yet, do it right now.

This is something that really can’t adequately be expressed with words, so I’ll let the soothing voices of Salman Khan and John Resig do it for me in this introductory video:

There’s a whole bunch of stuff to be excited about with the introduction of Computer Science, but I’ll just focus on how we facilitated the two aspects I mentioned before.

Here, instant gratification is all about seeing the effects of what you’ve done as quickly as possible.

Every time you make any change to the code in the editor, the changes will come into effect immediately.

This means no edit-compile-run loop workflow that you see for compiled languages. There isn’t even an edit-run/edit-refresh workflow you get using scripting languages. There’s just edit-look-to-the-right. 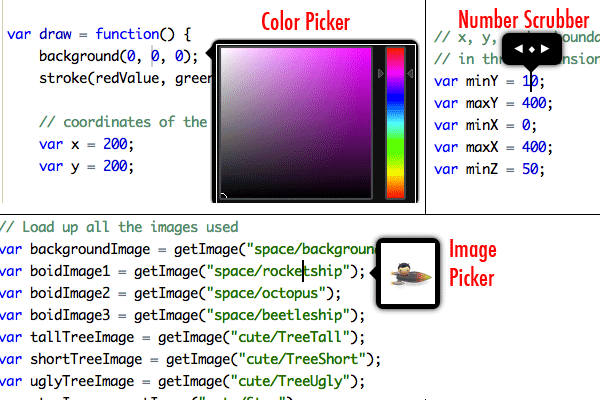 Since we have instant update, we can improve the experience further by reducing the friction on tweaking parameters. We made custom controls that let you tweak numbers, colors and images in the editor without having to type a thing.

The cool thing about the pickers is that they’re not only useful for tweaking parameters you know and understand – they’re useful for figuring out what a parameter does. If you’re experimenting with someone else’s code, you can play around with the number and see what effect changing them has in real time.

I think most people who start learning how to code outside of academics do it to make cool stuff to show off to their friends. We wanted to make that process even easier by making it dead simple to get some code up and running on a webpage viewable by the world.

There are two ways to get a Program with your name on it for the world to see.
The first is saving a brand new program you made from scratch on the New Program page.

The second is “forking” an existing program. In the user interface, the button is labelled “Save As…”. If you play around with someone else’s program and you want to save your modified version – no need to copy and paste the code for into a blank program – you can just “Save As…” and then you have your own saved copy.

Regardless of which you do, after you save, you’ll be brought to a page with a permalink for your new program, which you can share with the world! You can show off your work to your friends and family immediately.

In the world of SoLoMo, listing “Social Integration” as a feature has started to feel a bit jokey, but this time it’s not about “viral growth” or “lowering user acquisition cost”, it’s about giving our users a channel to brag about the awesome things they’ve made. It’s about getting people to be proud of what they’ve made and trotting it through their social network saying “Look at this ball! I made it bounce!”

I won’t muddle up this post with descriptions of what I did during my internship – that’ll come in another post. For now, I’ll just say that working on Computer Science has been a blast. If you’re interested in joining an amazing team working on creating free, world-class education for the world, check out Careers at Khan Academy for job openings.