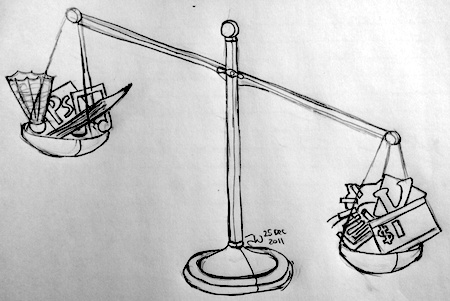 When I was in High School, I would try to absorb as much about computer science as I could from what I saw around me. I started writing competitions like CCC, dwite and ECOO-CS. I practiced for these competitions using UVa Online Judge, the USACO Training Program Gateway and by reading The Programming Contest Training Manual. I wrote word game bots and learned a lot from hacking challenge sites like hackquest and hackthissite.

But I also used to dance, draw, make abstract 3D stuff, game, and play badminton (bear with me — the part of this that doesn’t sound like bragging is coming).

When I got to university, I became fully immersed in computer science and software. I made the ACM team, started reading r/programming and Hacker News, started blogging about the code I was writing, started preaching the virtues of vim to my classmates and just generally increased the surface area of my CS knowledge sponge. This, in itself, was not a bad thing. Some of the things I’ve learned through these methods have been invaluable, but the cost was too high.

With the dramatically higher load of schoolwork from uWaterloo’s Engineering program compared to high school, this influx of new activities meant the sacrifice of something. Preparing for interviews and trying to build an online presence made it easier to justify dropping off the professionally irrelevant things. I stopped drawing, stopped dancing, cut back on badminton and nearly stopped gaming. After that, I was entirely immersed in my field with little else around me.

I started realizing how bad this had become when I found myself trying to think of something to code during my free time. This is so wrong. Coding on my own time had become this obligation I had to fulfill to maintain my sense of reputation and to counter any fear of failing to complete some non-specific goal of doing something amazing. Don’t get me wrong — coding on your own time is a good idea, but only do it if you’re working on something that excites you.

So this seems like a relatively simple problem to fix, right? Just start doing the things you used to do. Only one problem.

Lack of motivation is the killer of all self-improvement endeavours. Everyone has had a thing or two that they commit to doing that trails off. Whether it be eating right, going to the gym, keeping in touch with family and friends, or quitting smoking, everyone has failed to make or break a habit.

The most common pattern in my failures has been starting something, getting a rhythm going and then having one thing throw it off. Your schedule breaks down and you can’t get back into it. This might be when exams start, when a project deadline is coming up or when you get sick. I can always convince myself that I’ll get back to it later, but I never do.

One method to bolster motivation is to use incentives. Self-awarded incentives have failed me for two reasons. 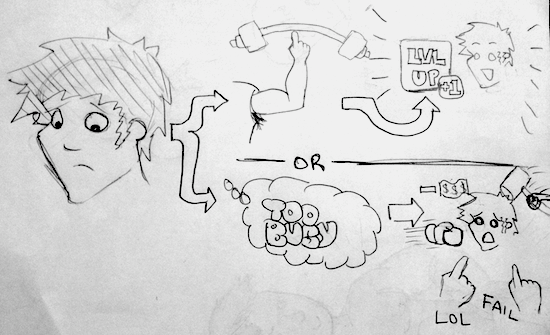 While self-awarded incentives are limited by what you might give yourself anyway, disincentives have no such restrictions. The only problem here is making sure that the punishment is unavoidable.

Self-imposed disincentives share the issue of convincing yourself that your goal was unachievable and abandoning your commitment. Luckily, certain kinds of disincentives are not only something you can reasonably ask of your friends, but something that some friends will thoroughly enjoy enforcing.

Schadenfreude is a most excellent German word that @ampersandy pointed out to me meaning “pleasure derived from the misfortune of others”. While serious misfortune yields sympathy from our friends — there are some undesired outcomes that are just downright funny. Whether it be someone attempting an acrobatic stunt and failing spectacularly or coming to the realization that they’ve just landed on Park Place and Board Walk with hotels in the same turn — sometimes it’s just funny.

This enjoyment of our friends’ misfortunes is the primary motivational tool in my plan. The idea is to select a disincentive which your friends will gleefully enforce, tell everyone about it, then fight to deprive your friends of that sweet, sweet Schadenfreude.

I couldn’t think of a suitable motivating punishment, so I crowdsourced it to my beloved friends with the following post on Facebook:

The bait was followed by a list of restrictions I was imposing on the punishment. #5 and up weren’t included in the list I gave to my friends, but are things I would recommend if you plan to make your own pledge.

I got the following recommendations for punishment upon failure:

But the winner was: 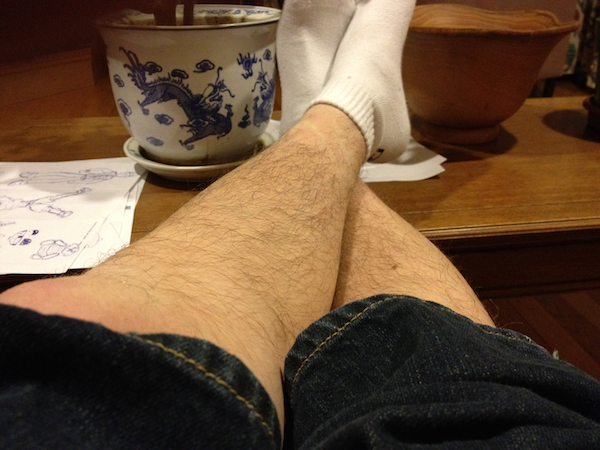 ** Starting January 1st, 2012, I will draw for a total of 121 hours before 11:59pm EST on May 1st, 2012. The accumulated time with be measured by me with minute accuracy using a stopwatch. If I fail to complete this goal, I will get my legs professionally waxed, and any of my friends who wish to attend will be allowed to do so. **