I’m back to learning graphics! A lot of interesting simulation and rendering work takes place on the GPU, and I didn’t have much experience doing that, so I figured I’d try to get metaballs rendering on the GPU. This time, instead of using the marching squares algorithm, we’ll leverage the GPU to compute every pixel in parallel!

In this post, I’m going to walk through the steps of getting metaballs rendering with WebGL. Each step will have a separate codepen you can play with, and a list of suggestions for things to try in order to understand the concepts. To get the most out of this post, work through the challenges in the comments at the top of each codepen.

To focus on what’s happening at a low level, we’ll be using WebGL directly, and not a high-level abstraction library like the excellent THREE.js.

Let’s look at a simplified version of the OpenGL programmable pipeline. This is the pipeline of steps that brings you from 3D geometry to pixels on the screen using the GPU.

If you’ve never seen this before, don’t worry. As you walk through the code examples below, you might want to refer back to this diagram.

Shaders in OpenGL/WebGL are programs written in a C-like language called GLSL.

After positions are set in the vertex shader, the positions of the vertices are passed to geometry assembly, which decides how the vertices are connected into edges and faces based on the argument to gl.drawElements or gl.drawArrays. For instance, if you specify gl.GL_LINE_STRIP, then geometry assembly will connect every adjacent pair of vertices by edges, and give you no faces. If you instead specify gl.GL_TRIANGLE_STRIP, then every contiguous triple of vertices will be formed into a triangle.

Next, the geometry goes through rasterization, where each face or line is turned into pixels that fit the grid of the output framebuffer. Information about each one of these pixels, including the interpolated values of the varying variables, is then passed to the fragment shader.

Fragment shaders output the color for a specific pixel to the framebuffer.
As input, they have access to any varying variables specified in the vertex shader, and a few magic variables like gl_FragCoord. As output, fragment shaders set the magic gl_FragColor variable to specify the final color of the pixel.

Uniform variables are available in both the vertex shader and fragment shader, and hold the same value regardless of which vertex or fragment the shader is operating on.

Aside: programmable vs fixed pipeline

While learning about OpenGL, and specifically WebGL, I was getting confused a lot about all the steps that were taking place. When I looked at how pixels got to the screen from geometry using shaders, I kept asking questions like: “Where is the camera set up?“, “How are coordinates converted from the world coordinate system to the view coordinate system?“, “How do I set the scene’s lighting”?

The answer to all of these questions is, in the world of the programmable pipeline, all of these things are up to you. There’s no default concept of a camera, or model coordinates, or lighting, or Phong shading. It’s all up to you.

This is in contrast to older GPUs and older versions of OpenGL which used a fixed pipeline, where you would set all those things directly and it would figure out how to convert from world coordinates to camera view coordinates and light the scene for you.

You can read a lot more about it in this excellent article: The End of Fixed-Function Pipelines (and How to Move On).

Step 1. Running a fragment shader for every pixel on the screen

To be able to run arbitrary computation to determine the color of every pixel in our canvas, we need to get a fragment shader running for every pixel on the screen.

To cover the screen perfectly, we’ll set up two triangles like so: 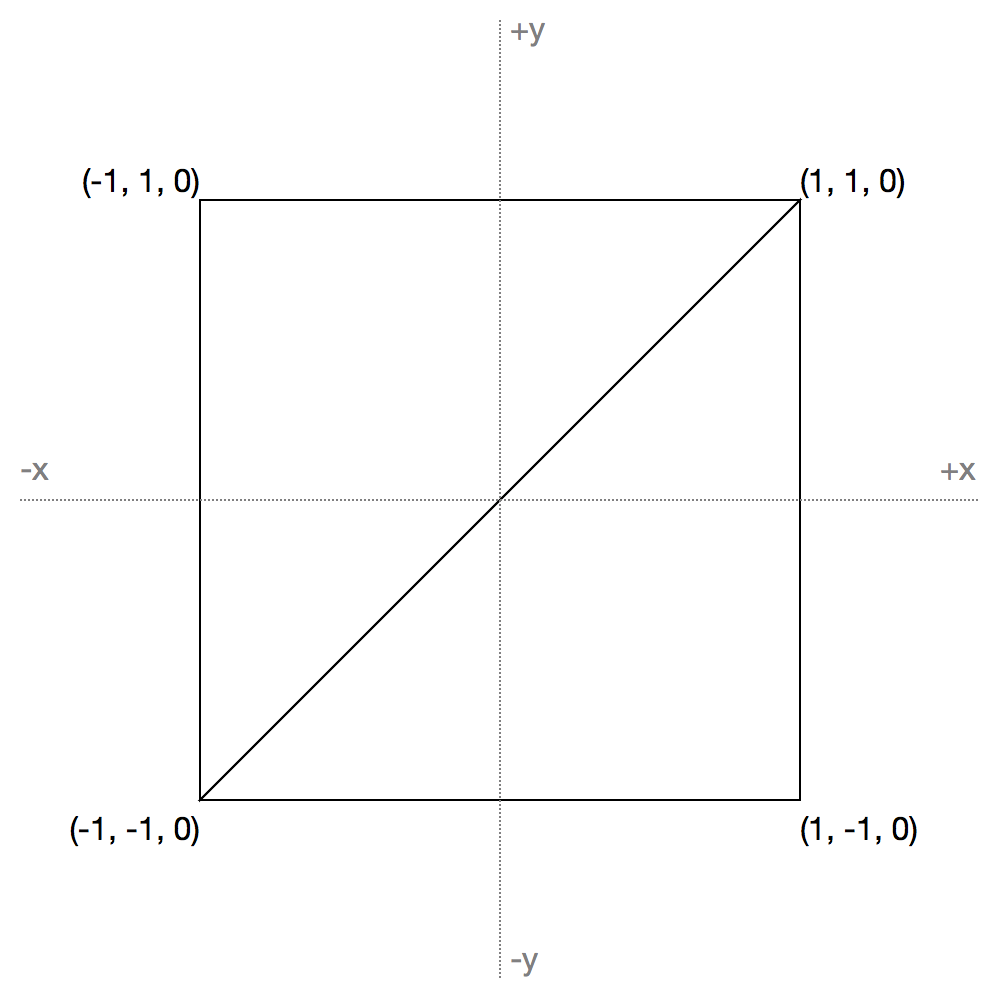 Click “Edit on codepen” and explore the code for it – I commented the code just for you! In a comment at the top, I’ve included some things to try out to deepen your understanding of the code.

Step 2. Doing something different for each pixel

Just as last time, click on “Edit on codepen”, and read through the challenges at the top.

In step 2, we managed to make each pixel do something different, but the only information available there was the coordinates of the pixel. If we’re trying to render metaballs, we need to get the information about the radius and positions of the metaballs into the fragment shader somehow.

There are a few ways of making an array of data available in a fragment shader.

Uniforms in GLSL can be integers or floats, can be scalars or vectors, and can be arrays or not. We can set them CPU-side using gl.uniform[1234][fi][v]. If we set a uniform via gl.uniform3fv, then inside the shader, we can access it with a declaration like so:

This has the benefit of being easy to use, but has a major downside of having a low cap on the size of the array. GL implementations have a limit on the number of uniform vectors available in fragment shaders. You can find that limit like so:

Which is 512 on my machine. That means the following compiles:

But the following gives me ERROR: too many uniforms when I try to compile the shader:

This limit is for the whole shader, not per-variable, so the following also doesn’t compile:

512 is probably good enough for our purposes since we aren’t going to have hundreds of metaballs, but wouldn’t be good enough for transferring information about thousands of particles in a particle simulation.

Second option: 2D textures. Textures can be constructed on the CPU via gl.createTexture, gl.bindTexture, and be populated with gl.texImage2D. To make it available in the fragment shader, a uniform sampler2D can be used.

The benefit of using textures is that you can transfer a lot more data. The limits on texture size seem a bit fuzzy, but WebGL will at least let you allocate a texture up to 1xMAX pixels, where MAX can be found with:

Another benefit is that if you’re clever, you can run simulations entirely on the GPU by “ping ponging” between textures: flipping which one is input and which one is output to move forward a timestep in your simulation without needing to transfer any of the simulation state between CPU and GPU memory. But that’s a topic for another day.

The downside is that they’re kind of awkward to use: instead of indexing directly into an array, you need to convert your array index into a number in the range [0, 1], correctly configure the texture’s filtering algorithms to be nearest neighbour to avoid dealing with bizarre interpolation between your array elements, and if you want support for real floating point numbers, your users’ browsers and devices have to support the OES_texture_float extension.

Third option: compile the array data into the shader

This is one of the techniques used in the awesome WebGL Path Tracing demo.

For our purposes, since we’re not transferring massive amounts of data, we’ll go with the easiest option of using uniform arrays. To the codepen!

Most of the change needed to get to this step is in the fragment shader and in new sections at the bottom labelled “simulation setup”, and “uniform setup”.

If you want to send a vec3 array from CPU to GPU, you’ll need a Float32Array with 3 times the number of elements as the vec3 array.

Here’s a snippet of the code that deals with this conversion and sending it to the GPU.

That’s pretty much it for the tricky WebGL bits! The last bit is applying the same math as in the first part of the Metaballs and marching squares post inside the fragment shader, and then sticking the whole thing in a timer loop using requestAnimationFrame, along with a bit of logic to make the balls move around and bounce off the walls.

Thanks for reading! Here are some of the resources that I read to help me understand OpenGL, GPUs, and WebGL: