My internship at Khan Academy is over now, and I already wrote extensively about everything I worked on. This internship was my first job working completely remotely from the rest of my team, and it worked out just fine.

Of the four month internship, I spent the first week in Mountain View with the rest of the team, then spent the remaining 15 weeks in Toronto. For the first two months, I was renting a desk from one of my past (awesome) co-op employers The Working Group. The last two I spent working out of my apartment because I got tired of paying for a TTC transit pass and spending an hour of every day commuting. The choice to work remotely was my own, and everyone Khan Academy did everything in their power to support that choice (to be honest, I was surprised they let me at all).

Working remotely came with a significant increase in responsibility and also in autonomy. I was responsible for managing my own time, tracking my hours, prioritizing my tasks and ensuring that everyone on my team was up to date with what I was working on.

This ability allowed me to be incredibly productive, because I was nearly never blocked. Not being blocked was incredibly important considering I would be blocked for 3 hours in the morning due to the time difference between Toronto and Mountain View if I needed to wait on someone else.

On the note of being blocked, another trick to stay more productive came from my mentor at Facebook. During one of our weekly 1-on-1’s, he asked if I had enough to do. I said that I thought I did for a little while, to which he responded that it was his job to make sure I had too much to do. This wasn’t some nefarious plot to work interns into the ground (I never worked more than 8-9 hours per day), but a means to always ensure I always had something to work on. In many cases, it’s not possible to increase the speed of completion of one specific feature, so the only thing to do is increase the number of things I can work on. This ensures that I always have an unblocked feature to tackle.

My absolute most productive days were the ones where I woke up early, exercised, showered, ate breakfast, then immediately started working. I read no email (personal or work related) until after lunch and focused on fixing bugs, writing features and merging the work that had been reviewed and approved by my teammates.

I think that avoiding reading my email or Hacker News before I started working helped me keep my mental context to as few things as possible. This is also the state I’m writing this blog post in at the moment, and a pattern I hope to continue for some time.

This level of autonomy would’ve been completely impossible (or at least the bad kind of chaotic) without the tooling set up at Khan Academy, which I’ll talk about later on.

I had no doubt that I would not personally know the team as well working remotely as I would have on-site, and I still think that’s true. I missed out on the small talk of the company, and really only knew people through their work. That said, I never had any problem with communicating in a professional/technical capacity with any of the team. Everyone was always very responsive and helpful while still maintaining a very comfortable, casual atmosphere.

I don’t really think Khan Academy did anything wrong in this regard – I think it’s just something that you have to accept if you’re not in the same physical location as your coworkers. What this really means is that you might need to have a more active social life, because the passive social life you get from being in an office with people doesn’t exist to the same extent.

I can see this fact being a large motivating factor behind contractors and very small companies participating in coworking, and I got this to some extent during my first two months renting a desk from The Working Group, but it was difficult for me to justify the costs at the time. If I were working remotely full-time, I think I probably would try to find some good people to share an office with.

I’ve worked remotely from the core development team (of a different company) before, and it was frustrating. Along with working with a more experienced team this time around, I think it was the tooling that really made (and previously broke) the remote experience.

All of the pieces of software listed below are what I used while at Khan Academy. While I think that these particular choices are all excellent, there are plenty of alternatives. As long as you have something that provides the same benefits, that’s probably fine. I will argue why I think some of these are better than their common alternatives.

At Khan Academy, I used Phabricator for both code review and task management. Having a code review tool was essential to being an effective remote employee. I’ll write a post in the future expounding some of the less obvious benefits of code review, but for now I’ll say that it helped keep code quality relatively high and helped me maintain my mental context of the code I need to work with regularly. Discovering some new, broken code that didn’t exist last week during a debugging session is always an exercise in frustration.

The code review tool within Phabricator is called Differential. Other teams within Khan Academy use Kiln. I like Differential better than Kiln or GitHub as a code review tool for a whole bunch of reasons. It’s worth noting that I think GitHub is still a vastly superior tool for doing reviews for out-of-company contributors to open source projects. 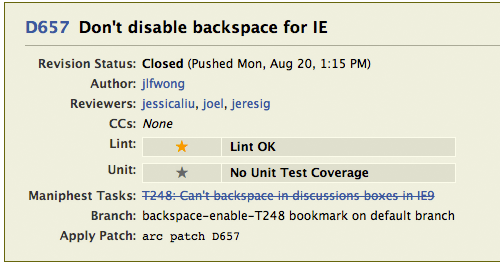 The task management tool is called Maniphest. Having a task management system allowed our team to maintain several different important discussions of bugs and features independently in a very organized way that made it easy to reference. This was especially important when some features ended up being implemented a couple of weeks after being discussed.

Maniphest has many of the features of GitHub’s issues and has a similar kind of integration where you can reference tasks in diffs and vice versa. The one feature I like about Maniphest over GitHub issues is the ability to claim a task as your own or reassign it to someone else if one was mistakenly assigned to you or if you’re blocked for whatever reason. 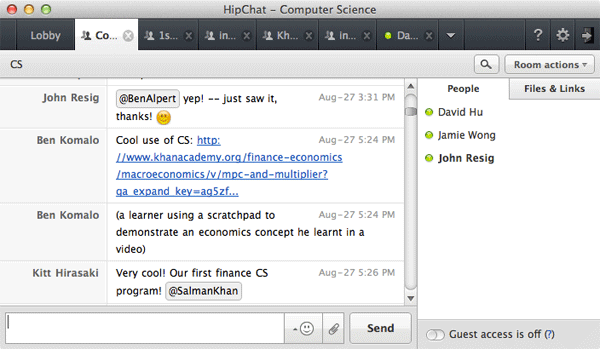 HipChat is a group chat system. In my previous, less enjoyable experience working remotely, Skype was the primary tool used for group chat. After using Campfire during my time at The Working Group and using HipChat at Khan Academy, it’s extremely obvious that tools not built specifically for developer team collaboration are at a gross disadvantage compare to those that are.

This was used to quickly diagnose bugs in production, get help with bits of code or infrastructure, pass around design mockups, help debug newcomers’ developer environments and link to funny pictures of cats.

Twice a week, once for developer standup, and once for a company update, I would hop into a Google Hangout room. This worked out really well – 10-15 minutes before the meeting started, a link to the standup would be posted into HipChat, so everyone could just pile in.

A recurring problem was being able to hear people clearly, which was mostly fixed by a quality microphone being passed around by the person speaking.
Please, if you have remote employees, unless everyone is sitting at their laptops during the call, invest in a good microphone.

The ability for people to join into the conversation while it was already underway without needing in invitation as long as they had the link made this run really smoothly. For that reason specifically, I like using Google Hangouts over Skype for group video calls.

Skype is still the de-facto 1-on-1 online calling platform, and I’ve yet to see anything offer a better service for free. Whenever I had a 1-on-1 call with someone, we would use Skype. Both the video and audio quality have consistently been better than Google Hangouts. 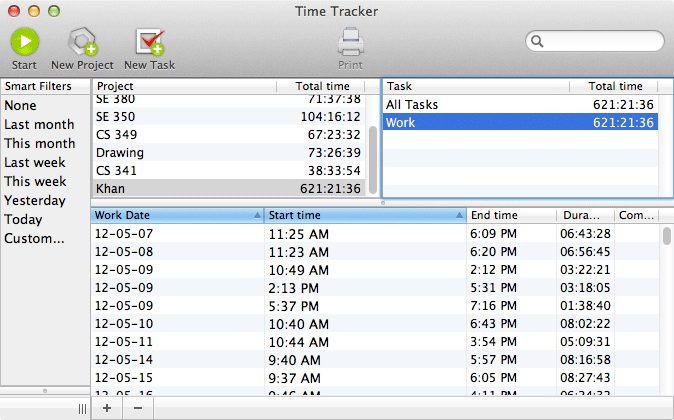 Since I needed to track my time, I wanted a program to track me time. I didn’t really need anything too fancy, so Time Tracker for Mac did the trick for me.

It’s ugly, has some annoying bugs, but it does what it’s supposed to. This is what I used to track my 121 hours of drawing and how much time I spent doing work for each of my classes last term.

Having now worked remotely with nearly no meetings, I’m confident that I can be at least as productive working remotely as I can onsite, provided that I know the domain fairly well. That said, I don’t think I’ll be working remotely for my next internship because of the social implications.

I don’t regret working remotely. It gave me the ability to separate tech stuff from the rest of my life, which was definitely a refreshing change. I started chipping away at the problems I described in Immersion and Schadenfreude by exercising more, starting badminton again and cooking more frequently. I had a great time at Khan Academy, and would recommend it to anyone with the opportunity to work there, onsite or otherwise.